Affenberg Salem stork station was founded in 1978. By this time only 15 pairs of storks were left in Baden-Wuerttemberg. This decline was caused by the intensification of agriculture and drainage of wetlands. Storks did not find enough food to raise their young. Another huge problem are electric wires. Only 10% of young storks survive their first migration into the south. Nowadays, the number of storks has risen to more than 1000 pairs in Baden-Wuerttemberg!

What does the stork station do?

By the mid-70s, white storks were extinct in many areas. The resettlement of storks is the reason that, nowadays, there are storks in Baden-Wuerttemberg. Here, at Affenberg Salem a free-flying colony of white storks was established by reintroducing some breeding pairs. Although, these breeding pairs were kept from flying south and, thus, have lost their instinct to fly southwards during the winter months, their young spend their winters in Africa or southern Spain. This is genetically determined. All young storks raised at Affenberg Salem migrate to the south during winter. 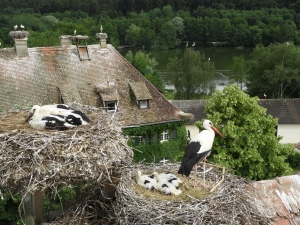 In many areas, storks still suffer from a lack of food and need a lot of effort to raise one or two young. However, this is not enough for a self-sustaining stork population. This is why we provide food for our storks. Because of this, usually, three to four juvenile storks per pair can be raised. The higher breeding success also compensates for unnaturally high losses of young storks when migrating south.

By the way: A pair of storks with four adolescent young has to provide 4kg – 5kg food every day.

Read the scientific study on the beneficial effect of feeding storks at Affenberg Salem.

Ringing – the personal ID of storks 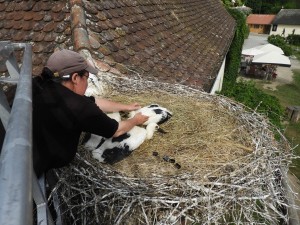 At the age of four to six weeks, we ring all young storks at Affenberg and surrounding areas. As a result, storks are individually marked and registered in an internationally networked database. With help of the rings, the population development of storks can be recorded. This allows a better assessment of various protective measurements. The rings show that in every fifth to sixth breeding pair in Baden-Wuerttemberg at least one pair partner was raised at Affenberg Salem!

Orphaned young storks find substitute parents at Affenberg. The young can simply be put in a nest of another stork pair. They do not distinguish between their own offspring and others and accept them easily. Furthermore, we look after sick and injured storks and release them back into nature, as soon as they are healthy. 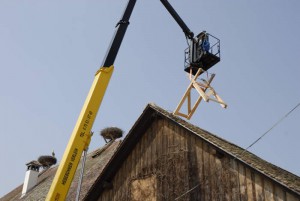 To offer storks a safe nesting site, Affenberg Salem has nesting platforms in suitable places. Before each breeding season, it is necessary to clean all nests and remove plastic waste. This ensures that water can run off during long-lasting and cold, rainy weather and prevents young storks from staying in the water and cooling down.

There are numerous measures to make power poles and water towers bird proof. Because of Affenberg Salem, in this area, numerous power pylons have been provided with deflectors and power lines close to nests have been isolated. This benefits storks and many other bird species that are harmed by unsecured electricity pylons. 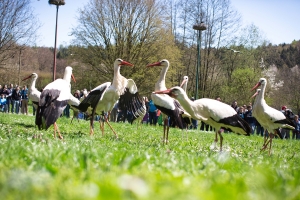 At Affenberg, visitors experience an impressive free-flying stork colony. During moderated stork feedings you get to know interesting facts. This is a great way to get young and old people interested in stork protection and nature conservation. You are only willing to protect, what you know! 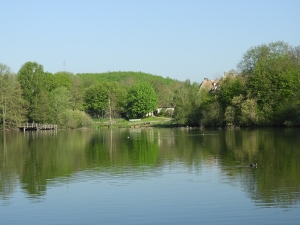 In order to establish a stork population, which is self-sustaining, it is important to create a network of biotopes and conserve existing wetlands. Food supply for storks can be increased by intensifying grassland. With the project of the Heinz Sielmann Foundation “Biotopverbund Bodensee”, a network of biotopes was created in the region and habitat for storks and many other endangered species has been improved. The creation of a large pond at Affenberg Salem, as well as the extensive management of meadow areas in the fallow deer enclosure, improves the food supply for storks breeding here.